Writing about life and love for the modern audience 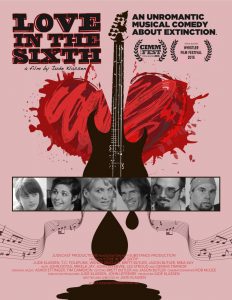 Like most writers, I’ve always supplemented my writing with straight jobs: basement hotelier, English tutor, film-set food truck chick, and jingle singer. As any decent writer will do, I mined all of them when writing about life and love for the modern audience in my unromantic musical-comedy feature film, Love in the Sixth.

A Spy in the House of Tech

Nowadays, I’m a full-time Nerd Girl. My daytime tech gig gives me glimpses into myriad lives, and few objects are more intimate than a computer. Wiping an ex husband’s user log-in from a laptop while the owner looks on and something like triumph swims with the pain on her face. Restoring a tablet that belonged to a beloved friend, partner, parent who is no longer around for better or worse. As life has become increasingly robotic and isolated, so to has it become more unavoidably intimate.

I write across the genres and always have: I’ve been a TV writer / story editor, a short story writer, a journalist, a screenwriter, and finally an indie filmmaker. Writing for film gives me the particular opportunity to use real life in a context that’s relevant for the modern audience in immediate and visceral ways.

When Real Life Gets into Writing About Love

With Love in the Sixth, my musical feature film that rocked the festival circuit before being released on Canada Screens VOD, I intended to write a classic romantic comedy that incorporated all of the standard RomCom elements: Meet Cute, Conflict, Obstacle to Union, Chemistry, Funny Banter, and… “I may not be perfect but I’m perfect for you,” and just change up the elements to make it applicable for today’s audience.

Because I was mining my own life and romantic successes and foibles, while LITS was going to begin with the protagonist going on a “Mancation” and then falling off the wagon, the story ended up being told in reverse.

My picture editors, Toronto filmmaking brothers, Jay and Brett Butler, became my story department, and the lads pointed out that my character was definitely not taking a vacation from relationships; in fact, if I looked closely, I’d see she was fully immersed in one that bore some certain toxic qualities with “Dr. Feel Bad.” It was eye-opening to see how I’d incorporated this story point without having even intended to. That was when we changed the title of the movie from Mancation to Love in the Sixth based on science writer Elizabeth Kolbert’s Pulitzer Prize-winning book on the first human-caused mass extinction, The Sixth Extinction. 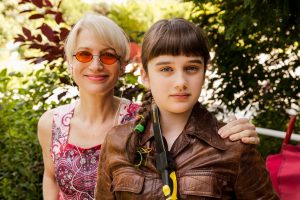 In Love in the Sixth, my real-life family also got involved. My then twelve-year-old daughter, Mika Kay, played my onscreen climate activist child, Kat: A teller of hard truths, at once innocent and jaded, and definitely not a fan of my character’s possessive musician boyfriend, Sid (co-star / co-songwriter T.C. Folkpunk).

My next film project, an anti-romantic comedy, will take place in the world’s tiniest computer store. (Think the 7 1/2 floor in Being John Malkovich (I’m a pretty rabid Charlie Kaufman fan), and apply it to a place that sells and services technology). Tiny Tech is a sequel to Love in the Sixth, and the story picks up where those relationships left off—a few years later.

In Tiny Tech, my character, Dani, will still be struggling financially–but at least she’s not crying into her vodka. The now teen-aged Kat will be interning for a punk nostalgia company, Retro Records, and in a position to send some much-needed coin her mom’s way. Kat’s Lady Boss (I’m picturing Tina Fey) is looking for cult level one-hit-wonders to put together a compilation record. Kat knows that Dani and Sid’s former punk band, Polyamorous Diatribe, has a killer track that her boss would love. The problem? Doing this would mean bringing Sid back into their lives. And that’s where we arrive at our conflict.

My life has always felt a bit like a classic romantic comedy so one might say it seems a natural pairing that I’d take to writing them. I met my ex-husband interviewing him for an entertainment magazine: I met my last significant ex-partner at a pub. I was there celebrating my young intern’s graduation from film school and I mistook a handsome dude watching the Canucks battle it out with Boston for one of her professors. I was recruiting tech-savvy youth for my Judecast interviews and quickly handed him my card and asked him to contact me. Yep, a classic Meet Cute.

If this article is your kind of reading, and if cultivating your innate creativity in a FREE online course sounds like just the thing, sign up here to receive it all- straight to your inbox!

These days I’m still artistically gutsy—but not as courageous in the real life department.

Recently my other songwriting partner on LITS, painter, composer Asher Ettinger,  suggested I have a V-Day party. I said, “Sure, maybe an Anti-Valentine’s party?” He looked at me with some concern and said, “How about just a Valentine’s party? What’s wrong with love?”

I tried to spin my cynicism as a shot at Hallmark Love, that old chestnut, but clearly it’s romantic love that harshes my buzz.

An ex romantic is a lot like an ex drinker—you may not toss back copious shots of the good stuff anymore, but that doesn’t mean you’re cured and you can just have a sip now and then. No ma’am, don’t even consider nursing a small tumbler of bliss. Even a half decent kiss could lead to a lost weekend. A lost year. A lost decade. 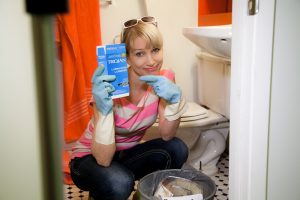 And don’t even get me started on the online dating monopoly. Love should not resemble applying for a job. It’s like the way emoticons have replaced subtext. People used to know when you were kidding without you having to add a winky face.

According to my unofficial research (I constantly picks the brains of everyone I meet), no one approaches anyone anymore. No bricks and mortar shopping—it’s all online: no trying it on, feeling the fabric, catching a flash of sublime out of the corner of your eye.

I know, I know, people meet amazing matches online. I have a good friend who just married the perfect guy and they met on Plenty of Fish. It’s also a really great place to meet serial killers (smiley face).

As crusty and cynical as I sound I still have a little Magical Thinking tucked away. I haven’t completely written off my inner romantic, she’s just not allowed to take me on a trip to Crazy Town. At this point, I would like to rather channel her toward writing about it instead. How hard could that be?

As a writer, filmmaker and human person, when life and art become so entangled even I can’t tell one from the other, no matter what wind blows through me personally, I write it all down, serve as a record keeper for our times. Only then do I say, aaaand scene… 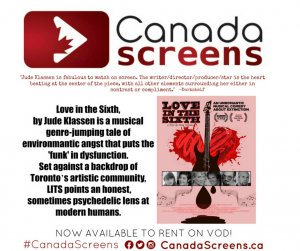 Jude Klassen is a Toronto-based filmmaker, journalist, TV and fiction writer, actor, and singer / songwriter and hopeless romantic. Her feature film Love in the Sixth is an enviromantic musical comedy now available at Canada Screens Video on Demand.

Love in the Sixth is Klassen’s debut feature film: www.loveinthesixth.com