It’s a Trash Revolution: a fun book for curious kids 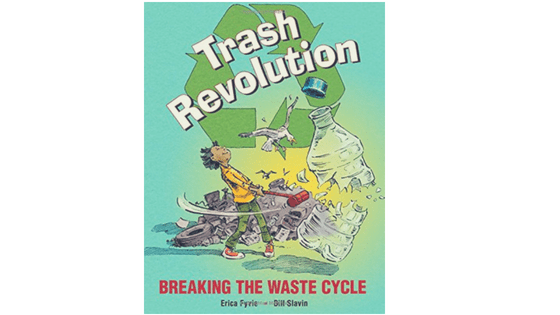 Most adults are aware of what happens when they throw things away, whether something is garbage or recycling, and what the end result may be, but children may not know about what happens to the items in their lives:

Part of a child’s development is learning how to question the unknown, so to harness this natural sense of curiosity, author Erica Fyvie in her new children’s book, Trash Revolution: Breaking the Waste Cycle (Kids Can Press), takes her readers on a journey of what happens to our “stuff.” Using the things kids keep in their backpacks- water bottles, paper, and other daily objects- helps kids understand our relationship to things and the earth we inhabit.

Fyvie’s lively prose and award-winning illustrator Bill Slavin‘s fun cartoons give their readers a new way of looking at the things in their world and what even a child can do on a daily basis to help protect the environment.

It’s never too early to become aware of our place in the ecosystem, and Erica’s book is an eye-opening education for children who are ready to learn about the world they live in and love.

This is Erica’s first publication, so I asked her a few questions about her children’s book debut.

Erica, can you tell us a bit about the book and its intended audience?

Trash Revolution is a non-fiction book for kids between the ages of 8-12. It’s about the stuff in our lives and what happens to it when we throw it out or recycle it. Each chapter takes a different item found in a kid’s backpack—water, food, clothing, paper, plastic, metal, and electronics—and goes through the cycle from production to waste. There’s also a chapter at the end about space waste.

How did the book come about?

I’ve been an editor for about 15 years, but this is the first book I’ve written. An editor friend at Kids Can Press approached me about the topic. Initially, they were interested in doing a book about recycling, but that project changed. I proposed a book about waste and the different ways we create it, and they seemed to really like it.

How did you come up with the backpack model?

I didn’t! I first proposed a time-of-day model, which meant that the book would take you through a typical day: wake up and go to the bathroom to explore water waste, get dressed to talk about clothing waste, and so on. After I wrote that draft, we realized we weren’t interested in talking about a “typical” day, because that would mean different things to different people.

The editor I was working with at Kids Can Press, Yasemin Uçar, suggested using the backpack instead. It instantly made sense, this idea of a kid’s backpack as a microcosm of their world.

How did you collaborate with Bill Slavin, the illustrator?

He’s worked with Kids Can Press for years on several wonderful books, so it was lucky for me as a new writer. I shared some ideas with him and he came back with these comic-book style images that fit so perfectly with the content. I laughed out loud with a bunch of them, like when the astronaut looks perplexed about the space toilet, and the way he builds on the “Three Little Pigs” in the paper chapter with the pig drawings. It was such a pleasure to work with him.

Were you influenced by other books or sources while writing?

Yes, I really liked the tone of Annie Leonard’s work, like her short documentary, “The Story of Stuff.” She presented the material in a clear way that didn’t talk down to kids at all. The connections she made helped me narrow the focus and see how the pieces of consumerism and waste work together. There was also a series on CBC Radio that I thought was excellent called “What a Waste” with Torah Kachur.

What’s the best and worst advice you received while writing?

The best advice was probably to bounce ideas off my own children and the children I know. I asked them so many questions and gave work-in-progress presentations at schools, and all of it helped shape the research.

As for bad advice, I’m not sure. I probably told myself some unhelpful things, but such is the process.

What do you think readers will take away from Trash Revolution?

I hope they find it as interesting to read as I did to write. And maybe someone might pause before throwing out half their lunch!

If you have children at home, or you know someone who does, share this lively and informative book with them so they know you love them- and the earth in which they live.