The World Hasn’t Changed: Why Teens Continue to Connect to Shakespeare 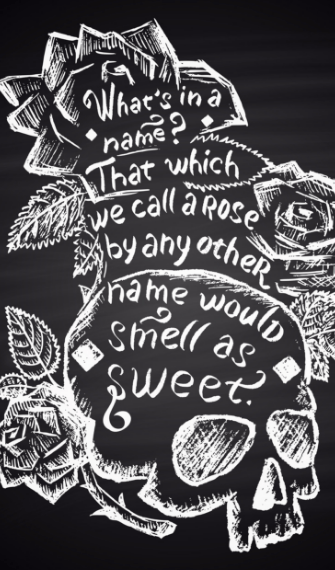 by Philip Schwadron,
Author, It’s Not Hard to Learn the Bard: A Guide to Introducing Shakespeare to Teenagers.

One might imagine that the teachings of Shakespeare might not be relevant anymore, 400 years after the fact. But when I teach Shakespeare to teenagers, once they get past their fear and trepidation of the language, they continue to personally connect to what he wrote about so long ago. Our world may have changed since then, but when it comes to people, it hasn’t changed much at all. His examination of the human condition is still entirely relevant. In fact, show me a teenager who isn’t affected by love, loss, family expectation, and sex, and, like our friend Hamlet says, I’ll “shuffle off this mortal coil”and into an early grave.

How Teens Connect to Shakespeare’s Themes

Readers continue to find inspiration and salvation in classic literature, but Shakespeare’s plays in particular are appealing to teens. His plays reveal something about ourselves that others don’t, and while our external world is ever-evolving, nothing about our interior human lives changes, and Shakespeare’s characters seem just like people today.

Shakespeare described the terrifying beauty of the adolescent so early in its development, and so definitively and so thoroughly, that it is only slightly an exaggeration to say that he invented teenagers as we know them today.

The characters are smart, strong, and emotionally open, and the eternal themes of illicit love, gender switching, disappointing our parents, and unmet desire continue to be completely relatable topics to teens.

The fact that Shakespeare wrote gender-bending characters such that the female characters were imbued with intellect, given equal opportunity to express themselves, and were empowered with opinions that were taken seriously by the male characters would be considered progressive nowadays, let alone in the 1600s.

In Romeo and Juliet, for example, the language is beautiful, full of love sonnets and romantic poetry. But what if we take the language out and just digest the plot? In that case, we get a story of two teenagers trying to have sex without their parents finding out.  (Sound familiar?)

How it plays out is Juliet meets Romeo at a party on a Friday night, they make out a little bit, and then plan to meet again for some real quality time together. But their parents hate each other.  So, what do they do?  Sneak out of town, get married (after all, they’re Catholic and it’s 1593), then go back to Juliet’s bedroom and consummate the marriage, after which Romeo sneaks out the window before dawn. (Note: I do not condone teens doing this, but let’s just say it’s been done).

Then there’s Henry IV, Part One. Here we have a father who is completely disappointed in his deadbeat son as the son’s main occupation is to hang out with losers at the pub, drinking and womanizing. But didn’t Prince Harry have the same reputation? And now look at him! (Parents, take note: there’s always hope).

“He was masterful at imbuing his stories and his characters with qualities that audiences and readers identify with.”

This is how I get my students engaged: by letting them see themselves in the characters. When the father says no, you will not date that boy, how hearing that feels to their modern hearts. Or when Hamlet tells his ex-girlfriend Ophelia how he never loved her, and how much that stung, and the extreme desolation it brought her to in herself. Or when Prince Hal’s father calls him a disappointment who will ruin England. There is pain in these moments, and 400 years later, that pain feels no less than it was back then.

In all of his plays are examples of the continuity of humanity’s flaws through the generations. Teenagers are more sensitive to and wary of their flaws than any other age group- and today’s teens are yet more aware of how they are perceived and how their lives can play out on a public stage, causing every emotion to act inside them tenfold.

Connecting to the Language

The secret of Shakespeare is to teach teens to dive into the themes, the characters, the humor, and the essential desires of what each of these characters wants without worrying over or getting caught up in the language and meaning of individual words.

Showing teens how to access the ideas will free them up to become acclimated to the story; after a time, once they have identified with the characters and themes, they’re somewhat freed up from their fear of understanding the words. When the lyricism of the language washes over their modern ears, in time, they’ll acclimate to the rich and glorious poetry of it and come to realize it’s not as foreign as they’d originally thought. Like any new jargon (wasn’t “bling” once just a sound, after all?) it too becomes familiar and then they can feel its beauty and the true gift of Shakespeare’s writing.

How This Book is A Useful Teaching Tool for Teens 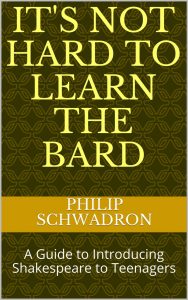 I wrote this book to give teens the opportunity to connect to themselves through something both current and historic, to know that the world doesn’t change much- or at all- and that their concerns are all people’s concerns. Being able to be introduced to Shakespeare through hearing it read aloud first shifts the focus to what it means rather than how it’s said. Then the music of the line- lines only only Shakespeare could write- become one of the greatest joys of the ear and heart.

This book is for teachers and high school students to have access to one of the most beautiful writers of all time. If you or your teens and students are intimidated by Shakespeare, curious about his work, or want to gain some insight into his plays so you can go to the theater and fully enjoy the experience, this book is for you. You will learn something about human condition- and importantly- about yourself.

Buy It’s Not Hard to Learn the Bard: A Guide to Introducing Shakespeare to Teenagers on Amazon

In Paperback or Kindle Edition

Bio: For over 40 years, Phil Schwadron has been involved in the performing arts as an actor, director, dancer, singer, songwriter, playwright and musician. He began his professional career at the age of 13, performing in the 1983 Tony Award-winning Broadway production of On Your Toes. After moving to Los Angeles, Phil, along with his twin brother Steven, acted professionally in television (Cheers, Beverly Hills 90210) and film (Safe Passage, She’s Out of Control, and The Applegates). Phil received his BA in Theatre Arts from CSU Northridge, followed by his MFA in Acting from California Institute of the Arts.

Currently, the Schwadron brothers write songs, record, and perform with the vocal comedy group The Poxy Boggards. Phil taught Shakespeare Appreciation for 11th grade, and Acting for the Camera for 10th grade in the Integrated Arts Department at the Orange County School of the Arts. During his ten years at OCSA he also taught  Acting and Tap Dancing, plus Acting Techniques for the OCSA Music and Theatre department. It’s Not Hard to Learn the Bard  is his first book.

Sign up to receive more blogs like this, info about our courses and services, discounts, and our FREE online course, “Cultivating Creativity.”