Most Common Modern Language Mistakes to Avoid in Writing 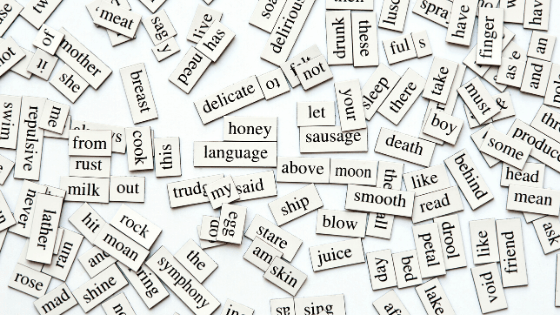 One of the reasons creative people are subject to making the most common modern language mistakes in our writing isn’t that we’re not smart, savvy, or plugged in. It’s that we have terrific ears.

Creative people are adaptable and empathetic, which are great strengths. These traits make us able to inhabit others’ voices and perspectives and shift our tone and format depending on audience and the purpose of our writing.

But being adaptable is also our downfall.

When people all around us (including characters on the smartest TV shows, government leaders, thought influencers, and so many advertising campaigns for big companies) begin slipping into erroneous language use, well, naturally so would we. Most of us never even had a fighting chance.

On one hand, language evolution is inevitable and healthy; after all, we want language to evolve with the times. It’s the reason we don’t use “doth” anymore (which for most of us is likely no problem). It’s also the reason new words get introduced like “bling” or “message” as a verb, and why in 2019, Webster’s Dictionary named “they” (the gender neutral pronoun) the “word of the year,” a true nod to inclusivity and acceptance. For indeed, how we doth speak to one another is indicative of how we evolve- and progress- as a culture. 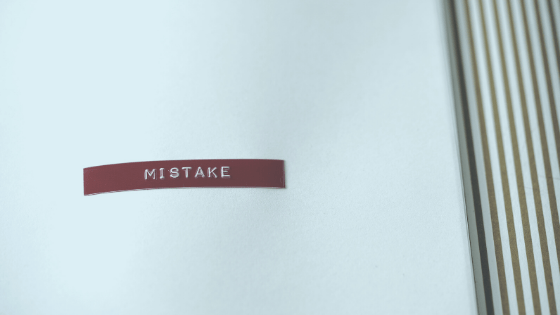 Yet while some new usages are perfectly fine, others are flat out mistakes.

What constitutes a mistake?

It is when the natural rhythm of grammar, syntax and punctuation is upended so it falls outside of what we- as a culture- stand on foundationally as far as language. There’s a reason for grammar like there’s a reason a house must be built on a foundation. Regardless of what style of house you stick on a foundation, that foundation has to adhere to the common building practices for foundations so the house stands. Screw up the foundation and the whole thing tumbles.

When we write well, our readers feel comfortable because we’re feeding those givens upon which all language rests. A clear, fluid sentence simply makes a person feel at home.

Conversely when we make a mistake, the reader may not consciously know a mistake has been made, but they may feel just a little less comfortable, and therefore less willing to hand over their trust and engagement. And when they do know? You lose your authority- poof- just like that. 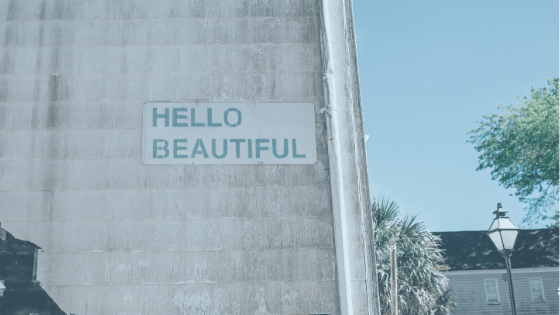 In a world where we’re fighting for every second of a reader’s attention, or where there is so much competition for work and money-earning and acquiring and keeping authority, shouldn’t we take the pains to know how to do it all properly so we’re the ones readers, employers and colleagues trust? Don’t we want to be the one who breaks the office debate on whether that one sentence needs a comma?

While we’re not going to unpack all the uses of the comma (that’s for my video series: Comma Talk) or deconstruct all you know about language, I will explain the following 5 most common modern language mistakes. Avoid these, and already you’re that much better than the rest of the bunch.

If you would prefer to see the comprehensive FREE Webinar I made on this subject, “5 Ways to Sound Smarter in Writing” click the below to subscribe to One Lit Place. The Webinar Replay is free and comes with bonus info as well as a downloadable tip sheet! 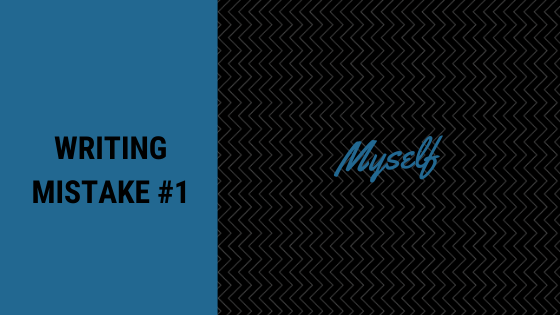 The pronoun”myself” has gotten a lot of play in recent years, 99% of it gloriously incorrect.

I suspect the etymology of the mistake is this: after many years of being afraid to use the word “me” (perhaps our parents drilled it out of us: it’s Lila and I, sweetheart), people first moved to putting the “I” where the “me” ought to be.

But since it would feel weird to populate all pronoun spots in a sentence with “I,” people reach for the next seemingly most available pronoun that looks vaguely similar (or at least starts with the same letter): “myself.”

(It may also be that “myself,” which is longer and certainly nicer to say than “meeee” simply looks- on paper- like it’s more elegant).

However, “myself” is not a substitute for “me” or “I” or any other word in the English language.

“Myself” is a reflexive pronoun to be used only when the noun wants to illustrate how neat or special it is that the noun has done something him/her/theirself:

“I was shocked when I visited Buckingham Palace, and Queen Elizabeth answered the door herself!”
“He was so happy he was able to change the tire himself.”
“What happened to your daughter’s hair?! Ugh, she got into the scissors and gave herself a haircut when I wasn’t looking.” 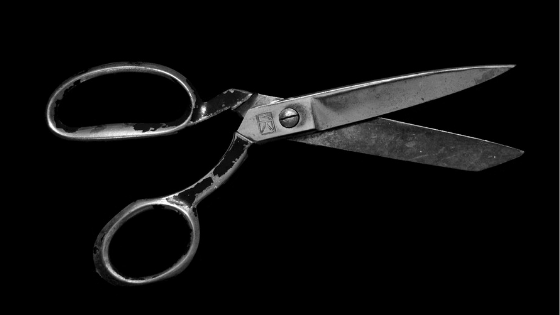 Yet here, we’ve become accustomed to seeing “myself” as both a subject and an object in a sentence, having no relationship to reflexivity.

“Lou and myself want to thank you for coming.”
“Myself and Bill are hosting the meeting.”

These usages a) make no sense and b) make no sense. Would you say Myself is hosting the meeting? Unless that’s your unfortunately named colleague, it’s time to stop that nonsense right now.

Feeling uncomfortable? I’ll lay out a few issues for you that may help:

What is a subject?

In a sentence that begins with a subject (the person doing the doing), please use the “I.” It is correct, I promise.

“I will be there with bells on!”
“Every year on January 1, I make a resolution.”

By and large, you are probably already doing this. “I” is the subject here- doing the doing. Most people won’t head over to the myself in these instances (though we do still see it!)

Where people get tripped up is when there are multiple subjects (two or more things/people doing the doing):

“Bill and I are hosting the meeting.”
“If you give me some advanced notice, Luis and I will be able to get you the notes.”

If you’re not sure which pronoun to use in the subject position, pull apart the subjects.

What is an object or indirect object?

An object or indirect object in a sentence is the thing/person receiving the action of the verb.

“My mom shows me her love by sending me magazine articles.” (The subject (my mom) shows (verb) me (indirect object) love (object).
“The whole group performed a really goofy rendition of “Stayin’ Alive” for me on my birthday.”
“He loves me.”

Again, you probably wouldn’t say, “My mom shows myself her love,” or “He loves myself.” (Right?)

The issue, like with subjects, tends to be with multiple objects:

“Raine and Mary are hosting a party for Jim and myself.” (Really, really incorrect)

When in doubt, pull apart the objects.

In short (or not short, but thank you for your attention):

For a fun and yet even more comprehensive look at everyone’s favourite personal pronouns, check out my blog: I, Me, & Myself. 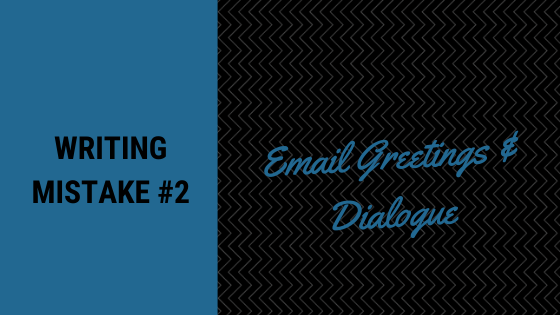 Typically, people write something like this in an email:

When greeting someone in an email with Hi, Hello, or Hey, you must include a comma prior to the next word, which in this case is a noun of direct address.

We use commas prior to and following nouns of direct address to separate out the noun from that which comes before or after. If you do not include that important comma, you risk looking silly or worse, you could bring on a gross misreading.

“You’ve got this babe.”
“Are you ready to eat George?”

If you have a line of dialogue in which one character is addressing another by name, that name must be flanked by commas:

“In short, Mary, I totally agree with you.” 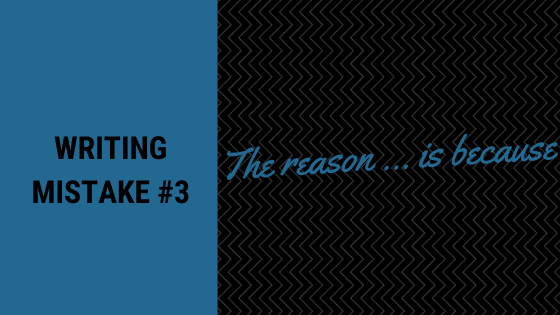 Mark your calendar: today is the last day you will use that construction (yay, you!). This mixed construction is made up of two short phrases that basically cover the same territory.

“The reason I’m late is my Uber got a flat.”

“I’m late because my Uber got a flat”

Neither needs to be extended to, “The reason I am late … is because my Uber got a flat.”

Never double up on phrases when one will do. Pick one or the other and commit to it. Perhaps try to stop beginning sentences with the verbal tick, “The reason is” and you’ll find it easier to stop the mixed construction altogether. 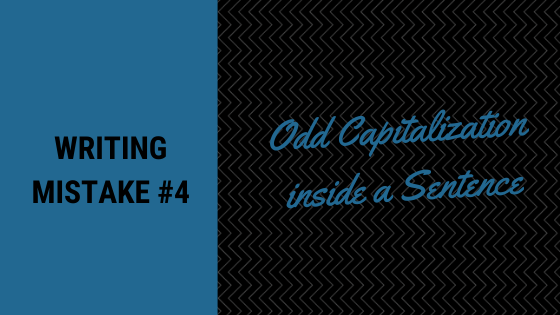 4) Capitalizing Words in a Sentence for No apparent Reason

Why do people do this? Perhaps they wish they were German! (In German, one capitalizes nouns, which is a holdover from the Middle Ages and further reinforced in “modern German” in the 17th century apparently to make nouns easier to see in a sentence).

Or, more likely, my theory is we see an awful lot of titles nowadays from scrolling (endlessly scrolling) through social media. Titles have different capitalization standard than normal prose, but if we see more titles during the day than their articles, it’s natural we’d start to believe that Capitalizing certain words for Emphasis is Normal. (It is not).

While capitalizing most words in titles, website writing, and advertising or marketing campaigns is normal, capitalizing anything mid-sentence in regular prose is not unless it is the name of something.  Therefore, unless you are writing in German, hoer das endlich mal auf, for Pete’s sake, and keep everything in lower case unless it’s the first word of the sentence, a proper noun, or a title. Dankeschoen. 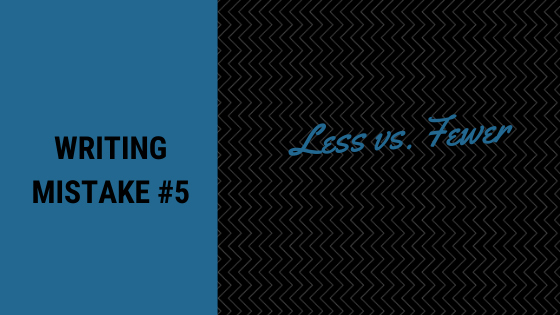 5) Not Everything is Less; Sometimes You Have Fewer

We all know people, including extremely smart people with doctorates and publication records, who use “less” incorrectly.  It again is a matter of habitual cultural use normalizing the mistake. But you’re stronger than that; you can buck the trend!

“She has fewer dishes than me.”
“We have gone to the museum fewer times this year than last year.”
“I have very few ideas on the subject.”
“Here are a few ways we can make this work.”

“I have less stuff.”
“You have less time.”
“We have less opportunity than our ancestors did.”

Doesn’t it feel good to know the difference? Now, if you see an ad that is something like: Buy this Grammar Book and Make Less Mistakes!

… run screaming in the other direction.

You Did It! You Learned the 5 Most Common Mistakes to Avoid!

Being the one who is able to avoid these common mistakes and instead attend to them properly will leave a very positive mark on those who come into contact with your writing. (It will also forever ruin you so you will now cringe every time you hear or read, “the reason is because.”). But such cringing comes with the territory. Now that you’re endeavouring to purvey accurate and clear communication, you will ultimately come out on top.